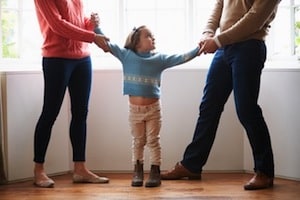 “Establishing paternity” means determining who is the father of a child. If two people were married when the woman had a baby, then her husband is the legal father and that will be indicated on the child’s birth certificate.

Establishing paternity is also important for other practical reasons:

Establishing paternity can also be beneficial emotionally to a child.Many medical conditions are genetic, and it can be helpful for a child to know his or her father’s medical history.

If a man agrees that he is the father of a child, he can sign a Certificate of Parentage (COP), a voluntary acknowledgement of paternity.

A COP can be signed at the hospital, immediately after a baby’s birth.It can also be signed at a state or country registrar’s office or at a welfare office.

If a father refuses to acknowledge that a child is his, paternity can be proved using genetic testing.This test requires only a small amount of saliva (spit).Either parent or a county office may request this test, or a court can order it.

Both parents and the child must be tested in order to establish paternity.If the test score is 95% or above, the man is presumed to be the father of the child.

According to a recent decision by the New Jersey Supreme Court, fathers have the right to seek genetic testing when there is “reasonable” doubt about a child’s paternity.The Supreme Court case arose out of a divorce in Morris County, New Jersey, in which the husband discovered after 20 years that his youngest “son” was actually fathered by his sister’s ex-husband.The husband demanded repayment of all costs associated with raising his former brother-in-law’s son.

After genetic testing has established physical paternity, the next step is establishing legal paternity is to file a complaint:

The natural mother, the man presumed by law to be the natural father, anyone whose name appears on the birth certificate and anyone who has attempted to file an acknowledgment of paternity as provided by law shall be made parties to the action, or, if not subject to the jurisdiction of the court, shall be given notice of the action … and an opportunity to be heard. The child may be made a party to the action and a guardian ad litem may be appointed by the court to represent the child.

The complaint sent to the alleged father must include a statement of the father’s rights and responsibilities to encourage him to voluntarily acknowledge paternity without the need for a trial.

As soon as possible after the complaint is filed, the parents will be called in for a family court conference.If the alleged father doesn’t acknowledge paternity, or doesn’t show up for the conference, then the matter will be scheduled for a hearing.

Once the genetic testing results are received, the alleged father can contest the results on the basis of fraud or inaccurate testing.If he does so, then the court can order another test.

At trial, a court can determine whether or not the alleged father is the actual father and may also make other orders about , custody, and visitation.

If you have questions about establishing paternity, we invite you to contact our Hackensack office for a free initial consultation with one of our experienced New Jersey family lawyers.