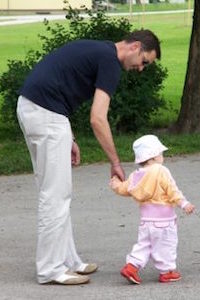 In an unpublished New Jersey appellate decision, the mother appealed from the trial court's final custody order, which awarded the father primary residential custody of their son. The mother didn't challenge the aspect of the award that awarded joint legal custody, but did appeal from the portion of the order that allowed the father to stop paying unallocated pendente lite support to her and ordered her to pay child support to him. She claimed it was inappropriate for the court to impute income to her, and ordering her to pay him child support violated a bankruptcy stay.

The case arose in 2011 when the mother left the marital home with their two-year old son including many belongings and personal documents. She didn't let the father know in advance, but went to her parents' home in Brooklyn and never came back. She claimed she was worried about the son's safety because the father owned a fun. The court later determined that she believed the father was having an affair and hiding assets from her and that she took the kid in retaliation.

The father sued for divorce and an order to show cause to require the mother to return their son. The couple agreed to a consent order that allowed the parents to share joint custody. The father was given parenting time during and around weekends. The father came home in the early afternoon, while the mother was a stay-at-home caregiver. The father began to work mostly from home, while the mother moved out of the parents' home and into her own place and started working part-time.

However, after the divorce was commenced, the mother took steps that went against the order for shared decision making and legal custody. She got an order of protection in New York to stop the father from getting in the way of her care and custody, but then the court dismissed the case for lack of jurisdiction. She threatened to sue the gymnastics class operator where the father wanted to send the son. She wasn't willing to meet with the father to talk about caring for the son and complained about the father to Division of Youth and Family Services. They found no problem.

In 2011, the court ordered the father to cover certain expenses and pay $1157 in pendente lite support. However, it also ordered that neither party could enroll the son in an activity without the other's written consent.

The mother got an evaluation of a speech therapist without the father's participation. The therapist treated the son with the father's consent. The mother then unilaterally got the son evaluated by a Board of Education Contractor and enrolled the son in a preschool for kids with special needs, which provided occupational, speech and physical therapy. The father agreed to let his son continue to participate rather than disrupt, but then the mother also put the kid in summer school without talking to the father.

A doctor evaluating the son based on the factors set forth under N.J.S.A. 9:2-4 gave the opinion it would serve the son's best interests to give the father primary residential custody. She concluded the mother was less willing to co-parent than the father was. Other experts were also consulted. The judge found that many factors didn't favor either party. However, the father was more likely than the mother to coparent and so awarded custody to the father. The court averaged the mother's income over several years and imputed an income of $70,000 to her after finding she was voluntarily unemployed. Child support was set at $124 per week.

The appellate court found that the evidence credibly supported the judge's determination. The mother argued the judge was not impartial, but the court found her claims for disqualification unreasonable.

If you are considering divorce in Bergen County, and you are concerned about alimony or visitation, it is important to retain an experienced and aggressive attorney to seek an appropriate outcome. Contact the lawyers of Leopold Law at (201) 345-5907 or through our online form. We have attorneys available who can handle all aspects of a divorce.